Reprimanding other people's children: dutiful or way too dangerous?

We've all been in public and seen children who simply refuse to behave. Naturally, this can become quite annoying, and the question often arises of what to do if a child is "acting up" when their parent is not around. Sadly, there are many places that some parents leave their children unattended simply because they're "children's places." This could include playgrounds or Chuck-E-Cheese's, but regardless of where it is, it can be tempting to scold the child in the absence of their parent. While there may be instances where it's appropriate to step in, it's important to recognize the potential disadvantages to choosing this route. 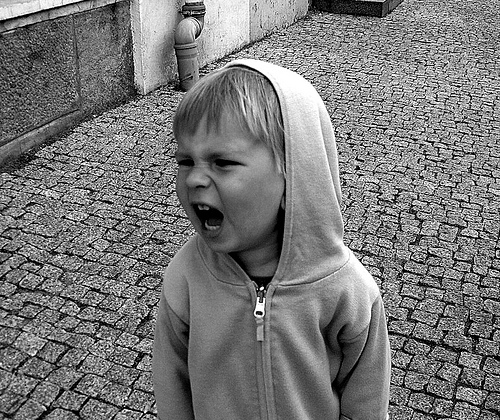 Advantages to Reprimanding other People's Children

There are advantages to reprimanding a child who is misbehaving in the absence of their parent. In some instances, your willingness to step in may diffuse a situation that, without your intervention, can get volatile. If for example, a 9-year-old is shouting in the face of a much younger child on a playground, and their parents aren't nearby, it might be best to step in. Keep in mind that rarely does stepping in involve physical contact with either of the children (unless one of the children are your own). Usually, the presence of an engaged adult is enough to diffuse the situation, and you can then attempt to locate a parent and make them aware of the incident.

The aforementioned point also goes a long way in helping a child respect an adult. When a child knows that they can run all over other people, they'll definitely do it. Putting one's foot down immediately will teach the child that misbehavior won't be tolerated, and eventually, the child may behave around everyone.

Another great advantage of reprimanding a child instead of simply ignoring them is that it can help make other children feel more comfortable. If a child is not being taught to manage their emotions, they may resort to bullying, and other children may be afraid, which can result in them being afraid to make an adult aware of the bully's behavior. If you step in, you act as a safety net of sorts, leaving both children with options that they may not take if an adult does not intervene.

If you do choose to intervene and directly address someone's child, caution and common sense will go a long way. One of the biggest disadvantages of reprimanding another person's child is the potential backlash from their parent. Keep in mind that protecting one's child is a natural, perhaps even raw emotion, and high emotions can lead to altercations, verbal and physical. Criminal attorney Kevin DeVore of Devore Law Office warns, "There is a good deal of truth to the idea that any one of us could face a charge of simple assault. It is part of human nature to lose one’s temper, to lose one’s cool when provoked." It is not far-fetched to imagine a mother who ran back to her car to get sunblock or extra snacks, only to come back and see another adult addressing her child in a way she might deem inappropriate, lashing out in seemingly irrational ways. Ask yourself whether the particular situation is worth risking an altercation, and, whenever possible, speak to the adult, not the child.

No one should ever try to override a parent who is in the process of reprimanding their own child, even if they're not succeeding in affecting the child's immediate behavior. If a parent is around and ignoring what their child is doing, it may be enough to say something like "my child used to do that, but I got them to stop by..." This will convey unhappiness with the situation without being directly confrontational.

As any parent knows, we may feel a bit queasy and defensive if our children are disciplined by other parties. It's important to remember this when we're in public and other children are running amok, but this doesn't mean that reprimanding a misbehaving child is always out of line. It's just important to put ourselves in other parents' shoes. Aside from that, weigh the potential for resolve versus escalation, and whenever possible, address the parent first.

Certified Family Life Educator Akilah Richards helps women and families prioritize their emotional wellness. She encourages parents to practice acknowledging their own emotions, and to make a conscious decision whether or not acknowledgement must be directly followed by addressing the perceived emotional trigger, particularly if that "trigger" is another person. Minnesota Criminal Lawyer, Kevin DeVore of the Devore Law Office, is a certified Criminal Law Specialist and offers offers experienced criminal defense representation to people throughout Minnesota and the Midwest.