Brain injuries and high school football: worth the risk?

High school football games can be one of the biggest community events a person can imagine. That's why many students, to their parent's excitement, are proud to become a star player. This jumping off point can lead to playing at the college level, or even a professional career in the NFL. But in reality, a teenager has a much higher chance of being seriously injured than going pro. Sadly, head injuries are an all-too-common occurrence in high school football, and worse, parents are often unaware of the dangers that their children face. 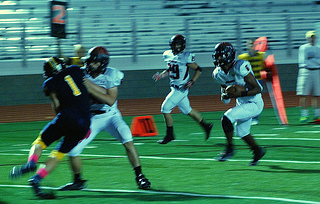 Why Parents Should Be Concerned

A head injury isn't necessary for there to be noticeable effects on a teen's brain. Research found that football players who suffered no obvious signs of head trauma during the season experienced decreased cognitive functioning and changes in their brain's structure. This was true of players who were unaware they'd suffered damage, which means that the dangers of the game have not been fully documented.

Everyone knows that football can be a dangerous sport. The point where liability can arise, however, is when the full scale of the risks aren't revealed. The NFL has faced numerous lawsuits related to lifelong injuries that players sustained during their tenure due to being improperly informed of the danger of head injuries. NFL doctors and coaches are far more experienced than those at lower levels, so it's highly probable that high schools and coaches aren't giving information to students and their parents about the risks of playing football.

It can be disastrous when a teen suffers a head injury during a game, but there are actions that can be taken. A parent can bring a claim against the school for negligently putting their child in danger without an appropriate warning of potential dangers. Anytime there's a serious personal injury, it's important to seek an attorney's help, no matter what kind of accident has taken place. According to one Long Beach personal injury lawyer, "When someone is injured, there's a distinct possibility that someone might be responsible for what occurred. It's impossible to know without an investigation taking place, and you'll need a professional on your side to review the facts of what led to your injury."

The school will undoubtedly claim that both the parent and teen knew the risks, but lawyers with experience in this field may be able to prove otherwise. In the end, a successful claim can result in financial help for a teen and parent simply trying to get their lives back.

The Best Defense is a Good Offense

One of the best ways for a parent to keep their child safe on the field is to become a part of the team. Attending practices and sitting behind the sideline can give a parent an idea of what's really going on. If their teen suffers symptoms of a concussion, such as dizziness, confusion or blackouts, they should immediately be taken to a doctor.

Another great way to ensure safety is to act as a second coach. A parent should keep their teen on a physical health regimen during the summer so that they're in peak condition when football season begins. They should also be trained in proper ways to play the game because the coach may not give them this important information. Players should be taught common sense tips like not leading with their head during a tackle or immediately removing themselves from the game if they suspect they have an injury.

Playing high school football can be a highly rewarding experience for a teen. Sadly, it can also be one of the most damaging. The risk of suffering a severe head injury is ever present, and football coaches bent on winning may sometimes put their trusting players at risk. That's why it's so important for parents to stay abreast of everything going on with the team. If their teen does suffer a head injury due to negligence on the part of a school, holding the school and coach responsible may be the only way to prevent another student from suffering the same fate.

Ashlyn Haldeman is a freelance writer based in Atlanta. She enjoys covering lifestyle topics, especially health, fitness and the arts. She also blogs about legal and environmental issues and consulted the website of a Long Beach personal injury lawyer, while researching this article.