Cycling and safety - it's a family affair

Bicycle riding is a great way for families to bond and spend quality time together. It also gets everyone away from the television and other electronic devices and out of the house for some exercise. People have traditionally ridden bicycles with little concern for head injury in the event of an accident. As children we road our bikes up and down hills and in the street with no bike lanes and without helmets, knee pads or any of the other protective gear that is now required by law. 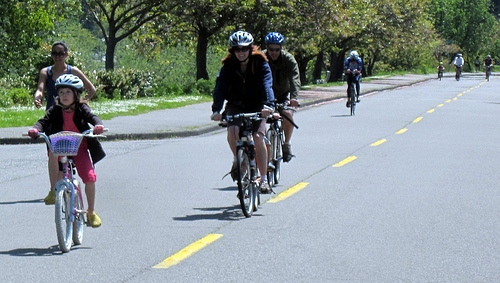 The focus on safety in contemporary society has also been enhanced by information concerning the long-term damage suffered from head injuries of any kind, including participation in sports as well as bike riding. In particular, we now know that concussions create injury situations that worsen over time instead of ceasing shortly after the injury. It is always a good practice to wear protective head gear when riding a bike, but this is even more important when on the highway and negotiating traffic.

A dedicated rider who has experienced accident repercussions will also usually include other protective gear as standard riding safety apparel, such as knee pads and bright colored clothing, because the decision to not wear adequate safety gear can end tragically in the wrong situation. Bike riding can be a fun and healthy family activity. It is important that children are taught the safety laws as soon as they are able to understand. By participating in family bike rides, as they watch the adults in the family practice, the safety rules it will become routine for them.

Here are a few laws concerning cycling that you should be aware of before your family hits the road.

"The Official Code of Georgia Annotated (OCGA) sets forth rules for cycling, requiring the rider to “wear a helmet if under 16 years of age.” OCGA §40-6-294 requires cyclists to ride “as far to the right side of the roadway as practicable” and “with the flow of traffic.” Cyclists should not “ride more than two bikes abreast” upon any roadway or “cycle while drunk.” Georgia laws also prohibit cyclists from carrying anything that would prevent them from keeping one hand on the handlebars at all times. Effective July 1, 2011, cyclists must signal while turning or stopping, “raising their right arm horizontally to indicate a right turn.” Further, motorists must stay 3 feet away from cyclists while passing pursuant to OCGA §§40-6-55 and 40-6-56."

It is important for anyone who will be riding a bicycle on vehicle roadways to know all of the rules and regulations regarding negotiating traffic on a bicycle. The most important of these regulations is the helmet requirement. Wearing a helmet in highway traffic is just common sense, as any bicycle operator who is involved in an accident is at a severe disadvantage for potential injury. The laws are in place for a reason, that being the best of possible outcomes for all motorists.

Motorcycle enthusiasts and rider organizations have successfully influenced legislatures in several states to eliminate a motorcycle helmet law, but that is not the same political dynamic for bicycle riders. Motorcycles are considered standard motorized highway vehicles and do not enjoy pedestrian right-of-way status. Bicycle riders should not be deceived into thinking the helmet is true protection or consider the decision on the basis of motorcycle riders. Most states have established legislation requiring wearing bike helmets in traffic, and operators can be cited by police officers, especially when involved in an accident resulting in injuries.

Bicycle operators who ride in highway traffic are required to comply with the same rules of the road as motorized vehicles. This includes giving adequate hand signals before turning, especially across traffic, and changing lanes. In addition, most states require the bike rider to ride on the right side of the highway and use designated bike lanes where they are provided. Riding after dark requires a significantly illuminated head lamp.

It is important to understand that bicycle operators do not have carte blanche claim to right-of-way as foot pedestrians. Bicycle riders who are involved in an accident in states that use contributory and comparative negligence doctrines may not be eligible to collect for injuries sustained in the accident if the court finds that the bicycle rider was assessed a percentage of assumption of personal risk that totals above the vehicle operators. This situation usually stems from navigating traffic without giving proper signals. It is important for anyone involved in a bicycle accident to retain an experienced accident attorney because these cases can be complicated and result in competing testimony.

It is much cooler to be a safe nerd than an injured or dead daredevil. Children learn by example if they are taught from the beginning to obey cycling laws it will become a good habit and your family can enjoy many years of cycling together.

Teresa Stewart is a freelance writer who actively “spins” indoors but is considering gearing up for outside activity. While reviewing the cycling laws on Atlanta injury attorneys Stokes & Kopitsky's website, she discovered that there are many laws in place that enable motorists and cyclists to safely share the road.